Source: University of the Philippines 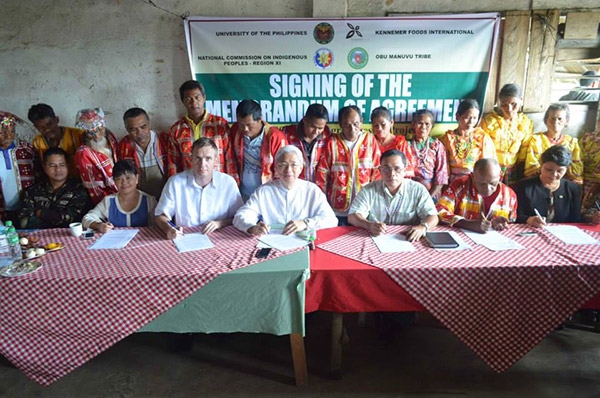 The University of the Philippines signs an agreement with a private sector food company and an indigenous group in Mindanao for an agro­forestry development project which is expected to improve the economic well­being of the indigenous community. Kennemer Foods International had expressed its interest in establishing a cacao plantation in the UP Mindanao Land Reservation in Marilog, which is part of the ancestral domain of the Obu­Manuvu indigenous people. A diligent study including a series of consultations and consensus­building involving the parties were held and led to the signing of an agreement.

On 18 October 2013, amid the festive atmosphere in the neighborhood of the UP Mindanao Land Reservation in Sitio Ladian Marilog, Davao the following affixed their signatures in the MOA: UP President Alfredo E. Pascual, KFI President Simon Bakker, National Commission on Indigenous Peoples Provincial Officer Cristito Ingay, and Obu­Maunuvu Datu Luis Lambac. The members of the Obu­Mnuvu indigenous people donned their ceremonial attire, and together with UP Vice President for Development Elvira A. Zamora, AVP Cristopher Espina, UP Mindanao Chancellor Sylvia Concepcion, local officials and tribal leaders witnessed the landmark event.

In his message, President Pascual thanked the proponents for their patience in seeing the process through to the agreement. He said that UP is mandated by law to help improve the lives of Filipinos, and in this case the IPs of Mindanao. He anticipates that, through this project the Obu­Manuvu would reap benefits from their ancestral land. He offered UP Mindanao as the ideal UP campus for their children and enjoined them to work together with UP in order for their youth to have the opportunity to obtain a UP education – a pathway to improve the lives of the people of Mindanao. He said UP Mindanao can help undertake livelihood opportunities for the indigenous people through researches on nipa, sago, and other indigenous resources, as well as provide technical assistance in the field of management. The agreement, he said,
Thursday, 16th April 2015 would bring positive ripple effects for gainful employment, production incentive, agricultural technology, and eventually revenue share that could fund improvement in education and health care for the community.

A free UP education with stipend would also be available for those who will qualify from the poor among them, a statement which was met with applause. Finally, he hoped that the tribes’ educated youth, in return, would pay forward to their ancestral lands to spur more developments and to care for the natural resources for future generations.

UP alumnus Elias Lopez, who championed the creation of UP Mindanao in Congress, was acknowledged by NICP Officer Ingay, and echoed by Pres. Pascual and other tribal leaders as the pride of the Obu­Manuvu tribe and a prime example of a member of indigenous people who was born poor and lifted himself and his condition through UP education.

In the meantime, for its part, KFI has vowed to, among others, provide annual financial contribution for the School of Living Traditions, set up scholarship programs and hire qualified members of the tribe to work in KFI’s corporate farms.